With The Huddled Masses, Yearning for Febreeze...

After arriving at the beautiful San Diego Convention Center Thursday morning at 6:45 am, there were already at least 300 volunteers in front of me. Found the actual line easily enough, but getting to the back of it made me feel like a salmon trying to swim upstream. I have been in crowds, but this was something else entirely.

"At least everyone looks happy to be here!" I said to a guy "dressed" as Aqua-man. Really nice guy, too.

The SDCC started in 1970 in a small downtown hotel convention hall, with all of 300 attendees.  Recently the organizers have had to cap ticket sales to 130,000, which doesn't include volunteers industry/VIP/celebrities, or staff/security. The Con has spread from the actual Convention Center (it is the only convention so far held in San Diego to occupy the whole building) into the Marriott Marina Towers and the Hilton Bayfront respective convention halls. It is slated to be in San Diego through 2015, when the city must renegotiate with organizers.  Locally for years we have had fierce debates in City Hall over funding either a new stadium for the Chargers/Super Bowl, or an expansion of the Convention Center for SDCC and other large Cons. I think y'all know what this fan boy feels about that!

After checking in, I was taken to a large holding pen where I waited for an assignment. I probably was the oldest one there, and as such, I honestly felt out of place. But it didn't take me long to get into the groove.

About half an hour went by before a coordinator called for people that could produce a booming, authoritative voice. I instantly jumped up and bellowed - "Where do you need me?" (I spent several years in the US Army, and if they taught me one thing, it was how to project my voice. I may feel like a jackass and sound like a wheezy humpback whale when I do it, but my voice PROJECTS, son!)

I ended up in a group of five, and we were given signs that read "THIS IS THE END OF THE LINE". My job was to stand at the end of the souvenir t-shirt line, and announce at the top of my voice - "THIS LINE IS CAPPED! YOU MAY NOT LINE UP HERE! THE LINE WILL OPEN UP IN ABOUT 30 MINUTES! PLEASE DO NOT STAND HERE1 PLEASE KEEP MOVING!"

This went on for the next 3 hours. I only opened the line one time, on orders from my boss. People were sneaking into the line left and right, which I tried to nip in the bud as soon as I realized what was going on, and was promptly ignored and was rudely told to go somewhere mythically really hot. I wasn't having a pleasant time.  I wasn't at all shocked by the bad behavior, mind - as I said before I am a veteran of Sci-Fi conventions, and I know how desperate fan boys and fan girls can be at the hint of the word exclusive. But I  stayed on post, and was so glad when they relieved me at noon. My replacement was a harajuku girl, (or anime babe, or tentacle porn star - I haven't a clue - Japan confuses me. Maybe one of you can enlighten me.)

After returning to the volunteer booth to turn in my "C" card, I was given Friday's assignment and then set free to attend the Con. Volunteers work 3-4 hour shifts, and when checking in for the day, you are given a sticker to put on your shirt stating "Volunteer on Duty" and a "C" card - which is used to track your shifts completed - signed off by the person you are reporting to. Easy to lose, easy to forget to turn in, these cards are the only way for the computer system to track your work. Lose them, and....(I asked, nobody could tell me what would happen, but they said it was probably something really bad.)

All in all, Thursday turned out to be my least favorite day. I was tired going into it (my own fault) and the job I was given was adversarial, and slightly soul crushing. But as the weekend progressed, it got better and better as I learned to go with the flow, and get the hang of the Con.

What a tragic summer for Colorado

As you have no doubt heard, there has been a mass shooting in Aurora, Colorado. (See here for details if you haven't.) My condolences go out and thoughts are with all those affected. If you wish to help the families and survivors of this unthinkable act of cowardice - please consider donating blood, which is always in short supply nationwide. Here is a link for the Bonfils Blood Center in Denver. And here is a link for the Denver Red Cross' Facebook page. This has already been a difficult summer for people in the state of Colorado, after extensive wildfires burned hundreds of homes near the cities of Fort Collins and Colorado Springs.


I really want to believe there is a special place for this subhuman and all like him.

Posted by Unknown at 5:35 PM No comments:

Before I jump into a real post, please forgive me for being so slow with my entries.


Anyway, I have no real reason why I haven't been posting - just a bunch of excuses. I won't bore you with them. Suffice to say today is the first day I have had that I really feel like my old self. It's been a hectic week. But thank you for reading, coming back, and please leave me comments once I do get this show on the road - I thrive off of feedback.

Stay Tuned - post tomorrow. I promise.
Posted by Unknown at 6:41 PM No comments:

But I am TIRED with a capital EXHAUSTED. I promise a full post tomorrow, and a detailed recap of today at the same time. So please don't give up on me yet, I will make it worth your while!

TL:DR - I is too damn old to be gettin' up at too DARK o'clock to deal with these youngin's and their NEED for instant gratification and their "ME ME ME" attitudes....  - NOW GET OFF MY LAWN!!! 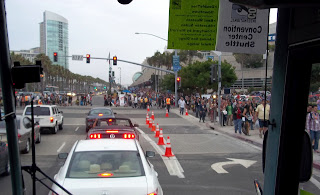 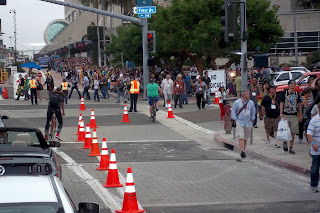 And that was at 7pm today, at only one end of the Convention Center!

Wish me luck tomorrow - better update in the making....


*I absolutely LOVE hyphens...and ellipses too!!

This evening was Preview Night at SDCC for those lucky few that were able to snag a ticket in the online mess that stood in for ticket sales in March this year, and for those who volunteered last year - I, sadly, am not one of those. BUT I did pick up my OFFICIAL SDCC VOLUNTEER BADGE!! (I know, right!? You think you're excited....)

I asked for the earliest assignment I could get, and as far as I know I am to report at 9am tomorrow, and there I will be in a pool of volunteers to be dispatched as needed. Which, in my mind sounded kinda...well...wet and downright scary! I mean, I'm still young - I'm not ready to be dispatched, and especially not in a pool of...gasp!.... VOLUNTEERS!!!


As for where and what I am doing tomorrow, your guess is as good as mine. (I am NOT going out without a fight though!) See you bright and early tomorrow as I begin my transformation into a SDCC volunteer!

*Thanks to my great friend across the Pond Darren "Dhee" Burr for the mention in his popular weekly comics blog on Forever Geek! Visit Dhee's column every Wednesday for his unique take on what's what in comic books, and stay for Forever Geek's wide range of articles and commentary written for the Geek in all of us.
(No, I did not get paid for that. That there was pure altruism, yesssiree....)

Goodnight all.
Posted by Unknown at 12:33 AM No comments:

On a Sad Note, a Somber Start -

RIP Gisela Gagliardi
Posted by Unknown at 7:30 PM No comments:

Not my first SDCC, but my first try at Movie Maker! I was so proud of this. This is the Con right after Heath Ledger died, so I tried midway through the video to pay homage to his last role. I hope you enjoy it.
Posted by Unknown at 12:30 AM No comments: